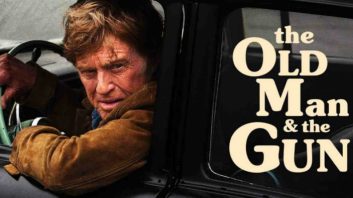 There are at least three good reasons to buy tickets for this Friday night’s screening (21st June), the last in our current season:

1. The Old Man & The Gun is a gently paced antidote to adrenaline-filled and CGI-rammed blockbusters. It’s a heartwarming crime drama based on the ‘mostly true’ exploits of Forrest Tucker – a 70 year old American career criminal and prison escape artist. In the early 1980’s, Tucker and the other members of the Over-the-Hill-Gang, pulled off an unprecedented string of bank robberies which confounded the authorities and enchanted the public.

“[The film] has the crackle and warmth of a fireside ballad, with a touch of poetry to it.”
Tom Shone, The Sunday Times

“If this is the Sundance Kid’s swansong, it’s certainly a good one.”
Matthew Bond, The Mail On Sunday

“Flat-out charming, a movie stripped of the usual clichés about ageing…. and shot with the retro feel of a New Hollywood classic.”
Alistair Harkness, The Scotsman.

Tickets: £6. Available in advance from Chorleywood Bookshop, online and on the door – if any are still available.