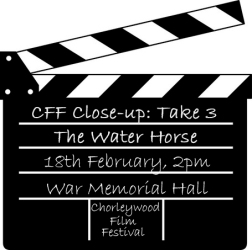 Saturday afternoon’s main feature is an exciting fantasy adventure based on Dick King-Smith’s best-selling children’s novel The Water Horse – Legend of the Deep.

Angus is a lonely young boy living in the Scottish Highlands during the Second World War.  His father, a sailor in the Royal Navy, has been missing since his ship was sunk a year earlier.

One day Angus discovers a mysterious egg near the local loch.  He takes it home and soon discovers that the strange, mischievous hatchling inside is none other than The Water Horse, the loch’s most mysterious and fabled creature. But with the Water Horse growing ten times its size every day, Angus finds it increasingly difficult to keep his new friend a secret….

It’s also a great antidote for half-term and weekend boredom!

“Like most British family films, Water Horse doesn’t dumb down its young characters or insult the intelligence of the audience.”
Roger Ebert, Chicago Sun Times

The Water Horse – Legend of the Deep (Cert. PG : 107 mins) is being screened at the War Memorial Hall, Common Road on Saturday 18th February.  Doors open 1.45 p.m. and the programme starts at 2 p.m.

Tickets for children aged 14 and under: £4 / older children and adults: £6 available in advance from Chorleywood Bookshop or on the door, if available. Please be aware the film contains a few sequences which may not be suitable for very young children.